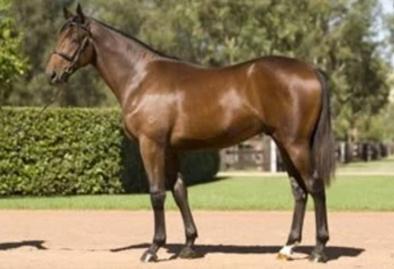 A four year-old gelding from champion mare Private Steer, Major Major broke his maiden two starks back at Canterbury and has progressed well since then.

Sent out in top order by Grahame Begg, Major Major did best in a driving finish for Peter Robl to win by a long head.

A $110,000 Inglis Easter purchase from the Coolmore draft, Major Major (pictured as yearling) runs for Alan Osburg and is the second living foal of Private Steer, who won 12 races and $3.4 million with highlight wins in the Group 1 AJC Doncaster Handicap, All Aged Stakes and QTC Stradbroke Handicap.

A half-sister by Danehill Dancer to dual Group 1 winner All Silent, Private Steer is now in the ownership of Fairway Thoroughbreds, who were in the news this week for breeding and selling the top lot at the NZB Premier Yearling Sale, their Fastnet Rock colt from Celebria fetching $1.975 million.

Private Steer had no foal in 2012 after missing to High Chaparral (IRE) and was covered last spring by More Than Ready (USA).