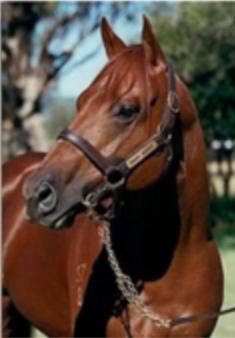 Prepared by Neville Begg’s son Grahame,Tweet had run some good races in her first four starts, but was wireless coming into this tougher assignment.

Easy in the betting, belied the lack of interest from punters in settling well for Peter Robl behind the pace and then accelerating strongly when shown clear running to win the 1100 meter dash by half a length over Fastnet Rock filly Mineko.

Tweet is the best of three winners from Yallah Prince mare Shaanxi, a metropolitan winner from the family of stakes-winners Rather Grand and Sublimity.

Shaanxi has not had a foal since Tweet and was covered last season by Magic Albert’s winning son Ilovethiscity.

a filly with a strong resemblance to her sire, Tweet is the 16th stakes-winner for Yarraman Park based Magic Albert (pictured), who stands this season at a fee of $19,250.