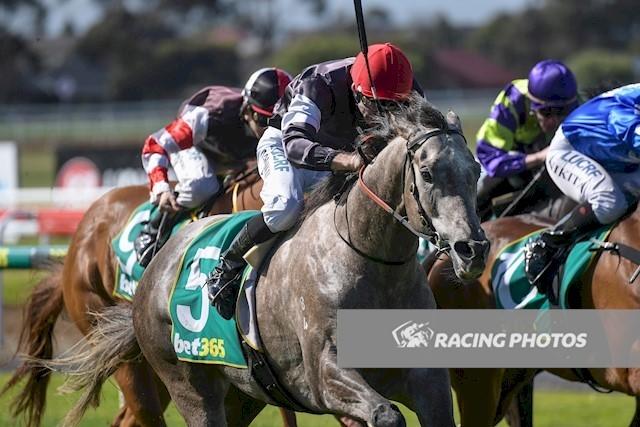 Lightly raced prospect Il Divo (pictured) steps out for his latest run this Saturday at Caulfield.

The 3yo son of Dalakhani was an impressive last start winner of his Maiden (1421m) at Geelong and trainer Grahame Begg sees this next outing as an important stepping stone forward to some bigger targets during the Spring.

“He’s a beautiful Classic style of horse and I’ve always had a lot of time for him”.

“We gave him three runs at the end of his 2yo season for experience and while he didn’t win one we thought he acquitted himself very well against what turned out to be very good opposition”. “I gave him a nice break at the end of the Autumn and his progression this time has been very pleasing”

On resumption at Sale (1212m) Il Divo was good late and then in much more suitable circumstances second up at Geelong up he was able to defeat quite a strong Maiden field.

“He went into Sale a little underdone as we missed a Trial, but I was delighted with his effort”. “They only went very steady early and he got a little keen in the middle stages, but after being left a bit when they sprinted he rounded it off really well at the end”.

“Second up at Geelong they went a much more genuine gallop”. “He got to the front pretty early and was a fraction green up the straight, but I thought he stayed on strongly all the way to the line and looked to have plenty more to give at the end”.

Begg will produce the Colt third up at Caulfield this Saturday in the Sportsbet Supports Mirabel Foundation 3yo Hcp over 1600m and the trainer sees the race as the ideal progression going forward.

“I like this race as a stepping stone for the horse”. “His short term aim is the Listed UCI Stakes (1800m) at Flemington on October 7th, but he had to have a run in between and this race will do the job nicely”

“I’ll probably ride him a little conservative from the draw as I want him staying relaxed and composed for when he gets to the longer trips”. “The 1600m around a tricky track like Caulfield with the Rail out 9m back on a Good track might be a tad sharp for him but the horse has been working very nicely since Geelong and I’m still confident he can run well and really finish off the race”.

“Like I said he’s a beautiful Classic horse and he could well develop into a real Derby prospect next Autumn”. “In racing it’s wise to stay open minded and I will continue to do that, but the 2500m of the VRC Derby is a gruelling contest for young 3yo’s and right at the moment I’m not sure if I’ll ask that of him”. “This time in he might get to a Moonee Valley Vase (2040m) or even the Group 1 Spring Champion Stakes (2000m) in Sydney, but right now my immediate focus is on the UCI at Flemington in two weeks time.

Il Divo will wear Winkers for the first time in Saturday’s race at Caulfield with Jake Noonan to ride again and at the moment is rated a $16 chance with Crownbet.