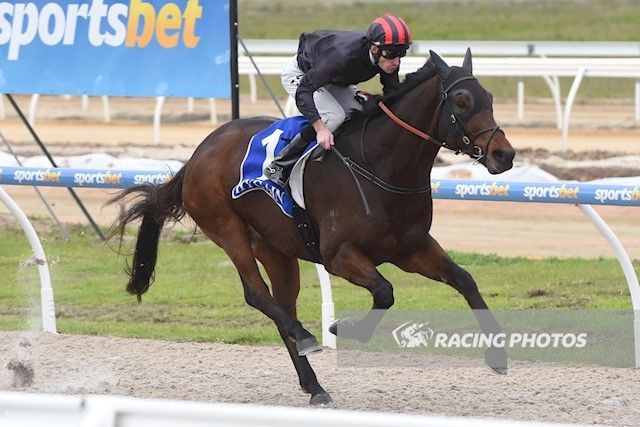 He may not be the best horse Grahame Begg has or will have trained but right now the Pinecliff based trainer would love a stable full of Emoji’s. And that’s not the smiley faces either rather that’s the gentle giant of a thoroughbred that Begg will take to Oaks Day at Flemington tomorrow for the Final of the Country Championship (1600m).

Weighing in just shy of 600kgs Emoji (pictured) is a whopping big boy, but Begg said he’s a lovely kind horse who thrives on stable life and is a pleasure to train. Happily for Begg too the 5yo Gelded son of Denman has established himself as a very tough and consistent racehorse recording 5 wins, 5 seconds and 2 thirds from his 22 career starts. In essence he’s in the money better than every other time he goes to the races and in that process he’s taken his earnings well over the $100k mark.

In just his third full racing preparation Emoji has again reaffirmed his consistency this time in winning 2 and placing another 5 times from 10 runs and the end result is that he’s earned himself a birth in the lucrative ($200k) Country Championship Final.

“We targeted this race mid preparation”. It’s serious prizemoney and a very restricted race”. “He earned his way in via the heats and comes into the race in fantastic order”.

“The horse has raced so consistently well throughout and but for luckless runs at his past two starts his winning record this prep could have been much better”. “He was three wide no cover two back at Mornington and then four and five wide no cover at his latest run at Geelong, yet on each occasion he’s run enormously well to still fill placings”. “Those runs were the product of bad barriers, whereas tomorrow he’s finally drawn an inside marble and as long as the fence is not off he should finally enjoy a lovely cosy run in transit”

Early doors Begg might have had a query at a strong 1600m with Emoji but with the good Barrier and as an older more experienced horse he’s quite confident that won’t be an issue against these horses.

“He stepped up to the 1600m for the first time this prep and only just fell in to win leading from the get go”. “But now he’s relaxing and finishing off his races so well I think he’s wants this type of trip again”. “He’s got his share of weight and might be a few pairs back in the run but he can quicken well when he gets a sit and cover so I’m expecting him to be strong at the end”. “Darren Weir’s horse Night Watch is progressive and looks the obvious one to beat but I’m confident Emoji can run a great race.

In the final tomorrow Emoji will be ridden by Champion jockey Kerrin McEvoy for the first time and will jump from Barrier 1 in the 16 horse field. The Country Championship Final is Race 4 to be run at 2.15pm