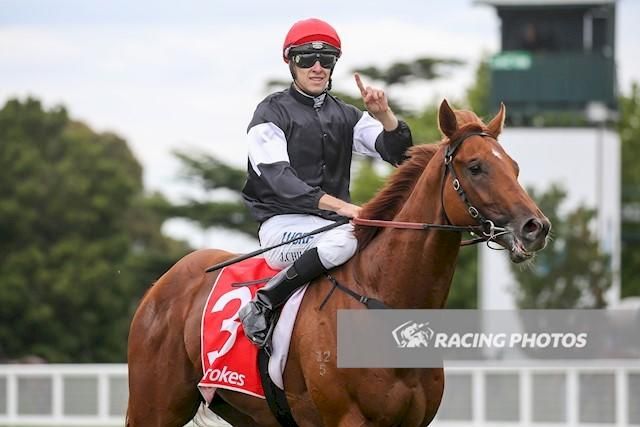 2yo Written Tycoon Colt Written By created an instant impression winning stylishly on debut over 1000m at Sandown last November. So high was the opinion held of him by Trainer Grahame Begg that he immediately Spelled him with the Autumn 2yo riches very much in mind.

The young Colt was next seen in public returning at the Official Trials at Cranbourne on February 5th where he gained his all important Barrier Certificate to race (after some issues at Sandown) and in doing so again displayed his high level of talent winning the Trial easily and unextended. From there it was on to the Group 3 Blue Diamond Prelude at Caulfield just five days later where he would encounter his first serious test.

Jumping from the outside Barrier the Colt showed outstanding gate speed to share the early lead before jockey Jordan Childs restrained him to sit just astern of the two leaders in the middle stages. Childs asked Written By to go up and join the leaders turning before then asking him for the supreme effort early in the straight after the two leaders dropped off. Like a good horse the response was immediate as he extended to set up a margin. In front and alone the Colt wandered around a fraction as he searched for competition for most of the straight, but Childs kept his mind on the job to hold off eventual runner up Plague Stone by half a length.

Begg noted after the race the Colts untapped talent suggesting that he’d never really been able to either train or prepare him properly due to Barrier manner problems that had consistently interrupted his early preparations. He suggested the horse had immeasurable improvement on this basis and that going forward when more mature and better prepared he had the undoubted ability to develop into an outstanding racehorse.

Right now though the horse remains unbeaten after this past Saturday and with a Group 3 win in the locker. As such and all being well in the coming two weeks Begg said he’ll be given his chance at Group 1 level in the Blue Diamond Stakes over 1200m at Caulfield on February 24th. It would be a huge achievement for Written By to win the Blue Diamond at just his 3rd career start after his earlier issues but if does so he would of course remain “unbeaten and untapped” with surely greater riches ahead of him as his career progresses.