It is Written! Begg is back!! 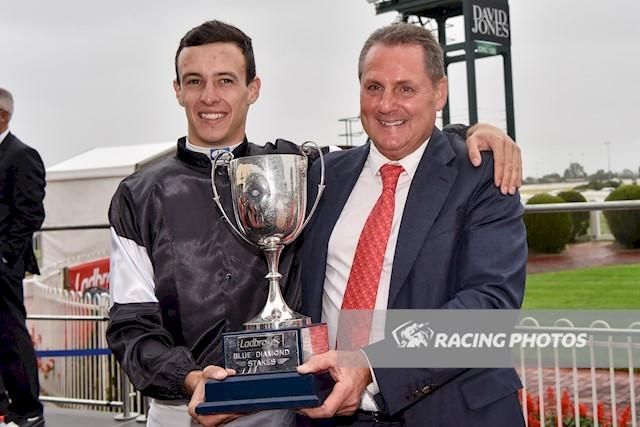 Often when we discuss athletes or in particular racehorses the comment is made “they never loose their ability”!

The performance of Trainer Grahame Begg to produce undefeated 2yo and now Group 1 Blue Diamond Stakes winning Colt Written By just 18 months into his return from a Training hiatus would seem to suggest that this comment is entirely appropriate to racehorse Trainers as well.

The 14 time Group 1 winning Trainer took some time away from the sport just 2 short years ago to refresh and recharge his batteries. The then Randwick based horseman had endured a period where he’d been unable to maintain the incredibly high standards and results that his career to that point had consistently produced and as a consequence he’d gone a little stale on the sport.

For the purists and punters alike thankfully that break was only brief and Begg soon made the decision to return to his craft. And in doing so he elected to switch city’s relocating to racing’s capital Melbourne where he would set up base at the Pinecliff private training facility on the Mornington Peninsula.

The return was not easy commencing in the middle of a typically bleak and cold Melbourne winter and armed with just a handful of Maiden and low grade restricted gallopers. On top of this and by Begg’s own admission the flow of business and horses from both old and new owners was not initially forthcoming.

“It was very hard to begin with, but I just had to knuckle down and do the best with what I had and generate some results wherever that may be”

Fortunately Begg never lost that unique ability to train a racehorse and the results did start to come. On top of this he was fortunate to have the support of his legendary father Hall of Fame trainer Neville Begg who in retirement was continuing to breed a few horses of his own and send them Grahame’s way. One of those horses was a young Chestnut Colt by Written Tycoon. Begg Snr had just passed the Colt in at the 2017 Melbourne Premier Yearling Sale and it was sent to Begg Jnr to be trained.

While that particular Colt was going through it’s education phases Begg was continuing to build some momentum with more and more winners coming from that start up group of horses along with a small group of new additions that had found their way into his Pinecliff base. The Train was gathering momentum!!

The Spring was now upon Begg and with the weather warming up so was his enthusiasm. He was now back represented at the famous Flemington Spring Carnival where he had enjoyed outstanding past Group 1 success with the likes All Silent and Bonanova. While he wasn’t quite able to generate the same success this time around the name Begg was back where it belonged and being noticed and mentioned again.

It was now just a case of finding that elusive “good horse” to hone his craft on and really cement his return. Happily for Begg that would quickly come in the form of that Chestnut Colt by Written Tycoon who was now carrying the name Written By. He’d been Broken In and was spending some time at Pinecliff but Begg quickly noticed he was going to be a little challenging

“He was very athletic and light on his feet and when I eventually got to letting him stride along for the first time the impression was immediate” “He was quick”!

Begg had to call upon all of his skills and judgement in taking Written By forward early as the Colt had some Barrier issues and on more than one occasion needed some reeducation from Breaker Shane Stockdale, but as Begg explained he had to persist.

“The horse was just a natural and I just knew if I could get his Barrier issues right I might have a 2yo on my hands”. “Unfortunately we couldn’t get him there for the Spring 2yo races, but with persistence we got him to his debut at Sandown in late November and he did the job impressively albeit on a wet track”

“it didn’t all go to plan initially”. “We planned to run him first up in the Chairman’s but he failed to get his Barrier Certificate back (which he lost at Sandown) at the Mornington Trials”. “That left us with one last option which was an Official Trial at Cranbourne after some further remedial work at Shane Stockdale’s”. “Fortunately he obliged that day at Cranbourne which then allowed us to head to the Blue Diamond Prelude at Caulfield the following Saturday”

As history shows Written By stepped up the plate big time by winning the Prelude and it was now a case of Begg the Master Trainer having him cherry ripe and spot on for the Grand Final two weeks later.

And cherry ripe and spot on he was as he thrashed his opponents in Saturday’s Blue Diamond to give Grahame Begg the return to Group 1 glory and a reminder to all in the industry that “you never loose your ability”.