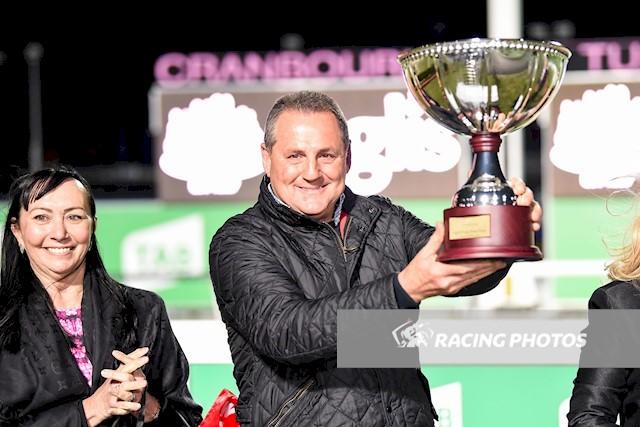 Fresh off winning this years Group 1 Blue Diamond Stakes with his star Colt Written By Begg returned to feature race success this time through his exciting mare Our Libretto. Undefeated since joining his stable from New Zealand earlier this year the daughter of O’Reilly overcame difficulties in the run Friday night to record a stirring victory. Accompanied by regular rider Jordan Childs Our Libretto settled at the rear before coming wide to make her final run. The big mare did wobble noticeably rounding the tight home turn and Childs needed to re-balance her early in the straight before then getting the very best out of her at the end to land the prize.

Our Libretto has been expertly taken through the grades by Begg after winning a strong Metropolitan Maiden first up at Sandown. She won again at Sandown before saluting at her previous start (to the Pinker Pinker) in another Restricted race this time at Flemington. The $100k Cranbourne feature was her first serious test taking on Oaks winners like Sopressa, Pleasuring and Special Alert along with multiple stakes performers like Perfect Rhyme and Pretty Punk but the mare was well and truly up to the challenge.

All being well Begg will now further raise the bar for the very lightly raced and untapped Our Libretto. He’s concious that Friday night was just her 6th career start and that her very best is still well ahead of her next season but if she pleases him in the coming weeks then she’ll likely be given her chance during the Flemington Cup Carnival week. The Group 2 Matriarch Stakes over 2000m on the Final day of the Carnival is on his radar but he’ll also assess a couple of other options before making his final decision.

On Friday night Our Libretto defeated Lopertega by half a length with a further head back to Pleasuring in 3rd.