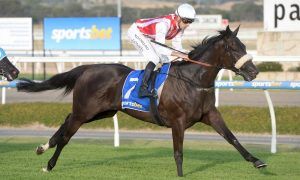 A pedigree page doesn’t guarantee success, nor necessarily does barrier trial form, but Grahame Begg appears to have plenty to look forward to if yesterday’s Cranbourne barrier trial session is any guide.

Unbeaten filly Dosh (Rich Enuff) was also set to barrier trial yesterday but Begg scratched her in preference to jumping her out at Caulfield this morning.

The hit-out of Butter Chicken, a Jonathan Munz-bred and raced mare who was runner-up in the MRC Autumn Classic (Gr 2, 1800m) in February, was enough to convince Begg that the four-year-old was ready to resume after “trialling beautifully”.

“We are starting to fine-tune her up a bit, so at this stage she looks like she’ll go to the races in the Let’s Elope on the 11th of September – that will be a kick off point for her,” Begg told ANZ Bloodstock News.

“We will see how she measures up and work out a plan with her.”

One of an enviable band of race fillies and broodmares owned by Munz’s GSA Bloodstock, Butter Chicken is a daughter of of Scintillula (Galileo), a mare who was a Group 3 winner and Group 1 placed Ireland, making her a sister to Royal Ascot winner Cuis Ghaire.

“She has been placed up to 1800 metres, but not all Savabeel mares are distance mares. She’s out of a Galileo mare, so you’d like to think she’d run a distance, but she seems quite sharp as well,” Begg said.

“She performed well at 1400 and 1600 metres and then up to the 1800 metres last preparation and she’s certainly an untapped horse. We’ve looked after her, she had a good spell after her first preparation.

“We are really working towards next year, more than anything, but we just have to see how she measures up in the spring.

“Hopefully we can get her ratings points up and get some (more) black type with her.”

The unraced No Whining, a half-sister to Award Winner (Exceed And Excel) who won twice for Anthony and Sam Freedman in May, is another homebred for Munz but Begg has no grand plans for the valuable filly at this stage of her career despite showing ability on the training track.

“She’s a big filly and we’ve given her plenty of time to mature,” the trainer revealed.

“She was having her first barrier trial and she had a jump–out previously at Caulfield. She is a filly that I quite like and I feel that she’d be more of an autumn filly, but it’s time now to start testing the waters a bit with her.

“I’ll start her off at a very low base and then they will tell us where they are at.”

Victorian businessman Munz, through his agent Dean Hawthorne, is not afraid to add to the depth of his quality homebreds by acquiring well-bred fillies at the Australian and New Zealand yearling sales each year and trial winner Passive Aggressive is a result of that strategy.

A sister to Group 3 winner and Group 1 placed sprinter Missrock, who also ran fifth in a VRC Oaks (Gr 1, 2500m), Passive Aggressive was bought by Hawthorne for $500,000 at last year’s Inglis Australian Easter Yearling Sale from the Cressfield draft.

“She’s a really, really nice filly. We’ve given her plenty of time to come into her own, so she will also start off at a very low base, in a maiden somewhere, and we will gradually build her up,” Begg said.

“She’s shown us nice things up to now. She’s starting off late, so we might be working towards next year with her as well but we’ll let her tell us where she is at.”

Dosh, who impressed in a jump–out at Caulfield a fortnight ago, meanwhile, remains on track for the Cap D’Antibes (Listed, 1100m) at Flemington on Saturday week despite missing yesterday’s trial.

“I gave myself two options, whether to come away (or stay at home), and the track was heavy at Cranbourne so I thought I’d just keep her at Caulfield,” he said.

“She has her next jump–out tomorrow and all going well she will run on Saturday week (in the Cap d’Antibes). This time of year there’s no hiding.”

All options are on the table this spring for Dosh who showed superior speed to her rivals in her two victories over 1000 metres so far and Begg is hopeful the filly can maintain that brilliance over 1200 metres.

If she does, it opens up the Coolmore Stud Stakes (Gr 1, 1200m) door against the colts and geldings.

“She is a high-speed filly, so I guess a lot will be told this time around. She’s a lot more mature, she’s a big strong girl. She’s got to let us know where she is in the order, so to speak,” he said.

“Obviously there’s no easy races, but to our eye she hasn’t lost anything.”

Begg believes the daughter of Rich Enuff (Written Tycoon) is in the mould of her sire and is much heavier than Written By (Written Tycoon), the Blue Diamond Stakes winner he trained until his retirement to Widden Stud in 2019.

“We will be nominating her in everything but, as I said, we’ll get her to that race on Saturday week and then we will just take it each race as it comes,” he said.

“There’s plenty of options, lots of three-year-old options. Whether that is just against the fillies or you can take on the colts at some stage as well.

“She is a very strong girl. She weighs a lot more than Written By did. She’s a much bulkier horse, very strong and she’s got great strength. She is very much in his (Rich Enuff) mould.”